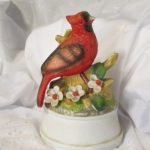 As a pleasure read that follows the development of a love story, this books does a great job and includes the accompanying historical settings for the love story. The faith expressed is written genuinely — possibly more so than readers would expect of that era, but then we only know what we were told in other books about the spiritual behaviors of those people.

There is some sympathetic contrast in the characters so that we occasionally get to see the humanity of the ‘enemy’. I would like to see more, but again, this book is a successful pleasure read.

The historical elements that I found interesting were those the author intended to highlight — decor and the preparation of wall coverings and other decor in a non-technical, speed printed environment. The artistic joy of the people who were doing the actual work along with the admiration of those who were buyers to have the art in their homes.
Charleston and the surrounding area were well described for the mind’s eye perspective to be colorful and full.

I highly recommend this book for all readers. Flinch-free!  The Chamomile is the first book in a trilogy of stories from one family which were all released in 2015.